I just found a very interesting article in Science Magazine about quantum computing. The idea of quantum computers is around for some time now – and even made it into popular culture¹. Yet, quantum computers are no longer just an academic idea. Quite the contrary, many big companies like Google or IBM are working on its realization. Reason enough for someone (yes! that would be me) working on digital technologies and their role in society to take a closer look on this technology and the possible impact of this development. 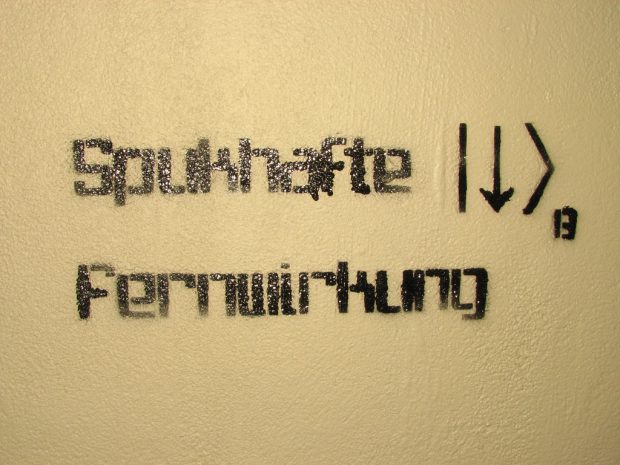 These developments may only affect certain areas of computation, or as Gabriel Popkin puts it:

This massive parallelism would not help with many tasks—nobody thinks quantum computers will revolutionize word processing or email. But it could dramatically speed up algorithms designed to explore vast numbers of different paths simultaneously, and solve problems that include searching through large data sets, discovering new chemical catalysts, and factoring large numbers used to encrypt data.

Yet, this ability of massive parallelization touches increasingly important areas of our daily lives and the way we communicate with each other. Here I want briefly discuss two examples, why this might be an issue – personalization of communication and encryption.

Personalization is an important feature of our contemporary life. Google shows us information that is relevant to us, Amazon recommends us the right products, and Netflix knows what movies we want to watch. This personalization is important, because the amount of information is growing rapidly and we are in danger of an information overload. However, these techniques are also creating filter bubbles or echo chambers, which are influencing the quality of our public and political discourses.

So far so good, but how is this related with quantum computing? One of the big issues of personalization is the vast amount of computional power needed to calculate the profiles of large populations. A very popular approach at the moment is collaborative filtering, which basically calculates similarities between items and users based on the ratings given by the users. The calculations of similarity between item pairs are independent from each other. And that makes this application an ideal candidate for quantum computers.

Being able to compute the profiles in a relative short time makes it possible to do these computations more often and more extensive. In the (near?) future vendors might provide every online shop with extensive and very precise classifications of their custumers. Since all the information can then be processed as a whole, there is the danger of even bigger centres of calculation, as Latour called it. As a result the filter bubbles that are now already in place will become more frequent and harder to break, as they might follow us around in our media environments.

Another important area of socio-technical change is encryption. With quantum computation it will be possible to factorize large numbers in a relative short time – demonstrated by Shor’s algorithm. With this possibility the very basis of our actual encryption infrastructure is gone for good. RSA and similar approaches are based on the assumption that the factorization of numbers is far to costly to break the code. By reducing this cost of factorization tremendously this assumption is obsolete.

Quantum computers will of course, as often argued, also bring new forms of encryption for communication. The issue here is not so much the encryption shift per se, but that this has to deal with legacy infrastructures. We will not start to buy notebooks with quantum chips in an instant, old systems in place cannot be easily be exchanged without endangering well proven work practices, and so forth. This shift will therefore create a certain period of time, where our daily communication will be even more visible than it is now – and that is a big problem.

This two short examples should make it clear that we are facing major changes in our communication infrastructures and practices. Quantum computers will have an immense impact on the way we move through the internet, how we communicate with each other, or how power structures will unfold as a consequence of new surveillance possibilities.

¹ Originally Shor’s algorithm was mentioned in an episode of the Big Bang Theory (S1E13) during the physics bowl.

Coding Society. Workshop on Atlas.ti
I am very happy to announce that there will be a(nother) workshop on computer assisted qualitative analysis with Atlas.ti, especially for STS students in Vienna. The one-day workshop is organized by Victoria Neumann, Marlene Altenhofer, and myself. Details can be found in the call below:   Coding Society – Introduction to computer assisted qualitative analysis […]